An editorial in today's New York Times suggests that "Latin America Is Ready for Its Black Lives Matter Reckoning."

Early this month, we discussed issues of racism across the Americas with Quechua-Peruvian journalist Marco Avilés, who joined friends of WWB Campus for a live Zoom session, reading from a personal essay on his experiences as a dark-skinned Latino and answering participants' questions.

We ran out of time before we ran out of questions, but luckily for us, Marco generously wrote out answers to all the remaining ones:

1. From Sonia Adams of Queens College & St. John's University:  Do you envision your journalism and/or nonfiction writings to be used as a teaching tool in U.S. education institutions? If so, in what ways?

Marco: First, I hope my work is seen as a tool for people to reflect and discuss, and I hope that also that my language is clear and simple enough for young people to engage with my writing. So my answer is yes, I do.

2. From Oana Popescu of the University of Southern Indiana: Why is it important for you to see the essay in a bilingual edition?

Marco: The essay was first written in Spanish for a Latin American audience, but now that it’s been translated, I think having both versions can help English and Spanish engage with the discussion around immigration and privilege, and engage with it through the same story. For me, it’s also important to recognize Spanish is a language spoken and read by millions in this country. So having a bilingual version can also help a bilingual classroom discuss the text from different perspectives – for example, comparing the original Spanish to the translation.

3. From Tanya Rulon-Miller of the Sumner Scholarship Foundation:  Just wondering where in Maine you were teaching? Also, [at] what ages were kids most receptive to your writing? What did you see in Maine that you did NOT experience in other parts of the US.

Marco: I wasn’t teaching in Maine. I am not a teacher but, as a writer, I was invited to speak at schools in Cumberland, Androscoggin and Sagadahoc counties. I spoke to students under 10 and to a classroom under 17.

Maine is extremely white, especially in the rural areas, and this makes you think that for many students race and immigration are not things they talk or face in a daily and natural basis. Actually, as a writer and Latino, I was invited to these schools to speak about immigration. And then I felt that this subject is seen as something very far away from their experiences.

4. From Christi Ann Merrill of the University of Michigan: I’m interested in comparing what a good host the teacher in Maine seemed to be vs. the interviewers on the radio with the students protesting in Peru. Can you say more about what the teacher did behind the scenes [that] made the conversation in the classroom go well?

Marco: The teacher that appears in the story was awesome, I think. It was his initiative to invite me and, after the talk, he invited students and other teachers to have an informal lunch with me. I met other teachers and heard their own concerns and challenges to speak about race and immigration with their own students. It’s interesting to note that many students, they said, had very strong opinions about immigration and were even Trump sympathizers. So I think teachers were trying to open up a conversation in the school, as it seemed that some students were already thinking and talking about it outside the school.

5. From Robert Vellani of the Alamance-Burlington School System of North Carolina:

Shining Path was a "brand" in some ways. How do local activists (who may be akin to movements with Evo Morales) find themselves defined in the narrative?

Marco: I think I don’t understand the idea of SP as a brand.

What I can say about indigenous people and activists in Peru, is that they are underrepresented in every activity and intellectual discipline, as well as in politics.

Robert: I think your points about language are so important. Baldwin writes his essay, “If Black English isn’t a language, tell me what is,” and scholars are starting to demand a larger understanding of language.

Marco: I would strongly recommend the book Borderlands/La Frontera, by Gloria Anzaldúa. It makes you think that, in literature and language, itself the borders between Latin America and the US (Spanish and English) are not the same borders we see in politics. Spanglish, Chicano, Tex Mex and Mexican Spanish and US Spanish are an amazing territory.

We'd like to thank Marco and everyone else who participated and made these sessions a success! For more writing from Marco, visit his website or read this recent article on Covid-19 and immigration (in Spanish.)

Interested in joining us for upcoming #LunchGlobally and #TeaGlobally sessions? Sign up for the Words Without Borders Campus newsletter here.

"Have you ever had the feeling that even if you wanted to you'd never blend in?" This is the question that launches the graphic fiction story "Gay Giant," just published in the 11th annual Queer issue of the magazine Words Without Borders.

At our June 1st #LunchGlobally session, during the first wave of protests against police racism, our group spontaneously brainstormed a list of books, films, and organizations to help students make sense of the issues. Because we were reading Marco Avilés' powerful essay “I Am Not Your Cholo," many (but not all) of these resources depicted Latinx experiences -- an important and sometimes under-discussed element in the discussion of biased law enforcement.

Here in New York, where WWB has its offices, we have been struggling to make sense of all that has been happening both locally and on the news.

"My Man": A Powerful Performance-Poem on Race and Identity, with Video 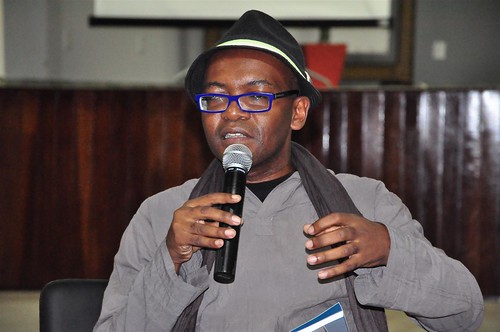 Ricardo Aleixo performing at a national poetry festival in Brazil in 2011. By André Luiz D. Takahashi.

I am whatever you think a black man is. You almost never think about black men.

Ricardo Aleixo's prose poem "My Man" appeared several years ago in an issue of Words Without Borders dedicated to Afro-Brazilian writing. At once confrontational and deeply vulnerable, this poem seems newly relevant today. It will serve as an excellent starting point for a classroom conversation of race and identity.